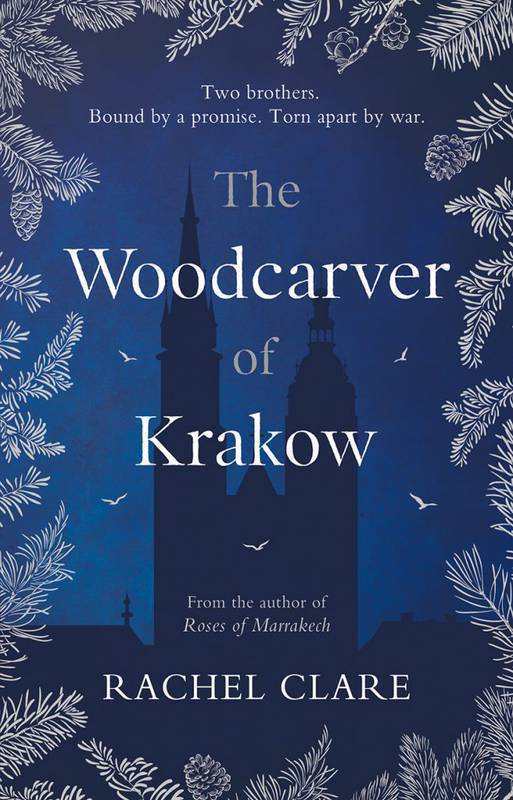 The Woodcarver of Krakow

Two brothers. Bound by a promise. Torn apart by war.

Tadeusz and Jacek Lewandowski are the closest of brothers. After the tragedy of losing their mother and with their father in the Polish army, they are raised by their grandfather, a skilled wood-craftsman. They enjoy an idyllic childhood in the Tatra Mountains.

Relying on each other for everything, Tad and Jacek have never been apart. That is, until, the Nazi and Russian armies close in on Poland in September 1939, forcing Tad to leave behind his degree course and everyone he loves to escape across occupied Europe.

Tad’s journey is fraught with danger but he battles on using the life-skills Jacek taught him growing up. Eventually reaching Blackpool, he joins the Polish Air Force. The war against the Nazis is just beginning and the aftermath of war has a huge impact on the lives of both brothers in more ways than one...

Rachel Clare lives in Lancaster, has a BA (Hons) in English and French, an MA in Modern Languages Research and a Postgraduate Diploma in Newspaper Journalism. She teaches French in a Primary School and has always enjoyed writing. Roses of Marrakech (2018) was her debut novel, inspired by her travels and family history.

Rachel says, “I have been on many holidays to Poland and have wanted to write a novel set there for many years. My mother, who grew up in Blackpool, told me of the strong links between the Polish Air Force in World War II and the town. From my research of that period, I found a lot of interesting facts and places in Blackpool with connections to the airmen and have therefore used them as a basis for this novel.”

Having thoroughly enjoyed ‘The Roses of Marrakech, Rachel’s debut novel, I could not wait to get started on ‘The Woodcarver of Krakow’ ; I was not disappointed.
The clever way the story is presented from both the 1930’s and current day is easy to follow, with some wonderful characters along the way.
The relationships created, notably the one between grandmother, mother and daughter are wonderful and so relatable – I found myself smiling at the very similar relationship between my own mother and daughter.
Although I have never visited Poland, through Rachel’s vivid and stunning descriptions of the Country I felt myself there and would dearly love to visit in the near future.
I would highly recommend this heart-warming story and look forward to reading more from Rachel Clare in the future.

Thank you to Book Guild and NetGalley for a copy of The Woodcarver of Krakow by Rachel Clare. I’m really torn on this one but I will give it 3 stars. Here’s why I’m torn, the storyline is really good. It’s full of Polish history we recently learned on a WWII History tour of Poland and German. The best I can remember it’s very accurate in the book. It’s told in a back and forth between the present family trying to find out about their past family and the telling of the past Polish family’s story during WWII. Here’s why I couldn’t give it a better rating, it was very repetitious, predictable in places and way too many unneeded descriptive details that only made the story drag. I found it an average read when it could have been a great read with more fine tuning.

Although classed as another World War 2 read, this was different from the others that have recently flooded the market. Two brothers Tadeusz and Jacek are raided by their grandfather after their mother’s death because their father is fighting in the Polish army. The lived in Tatras mountains, a place I have visited myself, a stunning, serene, idyllic place, until the Nazi invasion of Poland when their reality was torn apart. Tad leave Poland, forced to leave all that he knows and loves behind him. He makes it to England eventually and joins the Polish air force intent in fighting for his country’s freedom, all of the time with his brother who he loves dearly in his thoughts and in his heart. This book really highlighted Poland and how it and its people suffered during the Nazi and Russian occupation, It was interesting and well written and I liked that it was different from other World War 2 novels that I’ve read in the past.